Robotics Place is the Cluster of Robotics and Drones in Occitania: it was created in 2012 at the initiative of the business community. Initially created in the Midi-Pyrénées region, it expanded to the Languedoc-Roussillon region on 1 January 2016 when the regions fused to create Occitania. Robotics Place is unhesitatingly business oriented.

Robotics Place is aimed at stakeholders in industrial robotics, service robotics and drones, as well as suppliers of the technological building blocks of the sector, research and training organisations and robot and drone users.

Robotics Place has structured its actions around 3 objectives.

– Promote the emergence of collaborative projects and partnerships, the pooling of resources

– Develop relations with other French and foreign clusters or groups of companies,

– Look for new markets and new sectors for the development of the sector (new products, new companies)

– Support companies in their growth

– Promote exchanges between manufacturers and users of robots and drones

Structure the sector in Occitania:

– Communicate on the cluster and on behalf of its members (website, press releases, presentations)

– Organise or unify the participation of members in events (conferences, exhibitions, conferences) 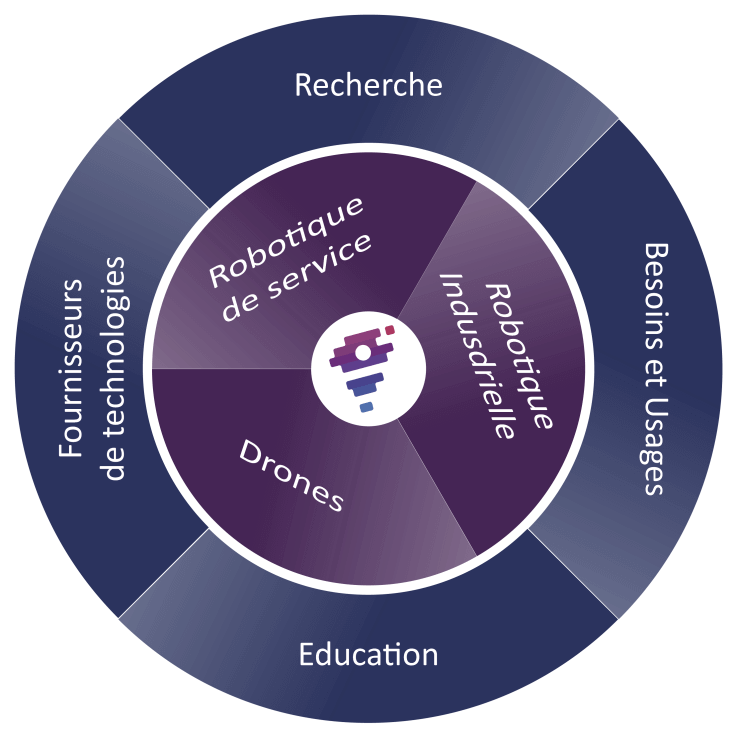 Robotics Place is organised in SBUs (Strategic Business Unit) and Competence Hubs and establishes partnerships/agreements with stakeholders in its ecosystem.

We have initiated the creation of the Fédération Française des Clusters de la Robotique with other French robotic clusters: Aquitaine Robotics, Coboteam, Proxinnov and Réseau 3R. In this context, we are working on broader collaborations and in particular, on international projects.

We are also involved in the regional inter-clustering of Transports Intelligents Terrestres with the Automotech, Primus and Mipirail clusters.

The cluster is an association under the law of 1901.  It is managed by a Board of Directors and a Committee whose officers are elected by the members :

Members of the Board of Directors and the Committee

Other members of the Board of Directors:

Two coordinators are in charge of the cluster’s operation:

Robotics Place’s contributions to its members

Affiliation to a coherent group that represents the profession at a regional level. The Regional Council considers that Robotics Place is its preferred interlocutor concerning robotics.

– Applications for internships or jobs

Contribution to the development of the regional ecosystem

Interactions between suppliers and robotic users outside any commercial context.

The benefits provided by FFC Robotique. Robotics Place members immediately become an indirect member of FFC Robotique. The actions of the Federation are more focused on national and international operations.